Version 1.0.9 of Actuate Motion is now available for download.

This version has been updated to allow the user to use custom profiles. You can now create, remove and edit custom profiles. Set the default profile to use for each input plugin, and load the desired profile via the Service Control window at runtime.

This version also adds options to the Help menu in the GUI to be able to more easily find and access the user guides for each plugin.

Version 1.0.7 of Actuate Motion is now available for download. This version has mostly been about quality of life changes and bug fixing.

Changes of note are that we have overhauled the profile configuration screen in the GUI to move the more common settings first, as well as ensuring that the naming of some of the settings are clearer. Along the same lines, we have added a “Profile Tuning Guide” to help explain what the settings do and how Actuate treats data.

For the developers that need to integrate with Actuate Motion, we have added some sample C projects to get you started using the UDP, Shared Memory, and Admin interfaces.

One of the things we get asked about a lot is motion compensation for use with VR.

Ideally, we want the player to only feel the forces created by moving them in relation to gravity, and not see the movements too. Unfortunately, if the user is aware of the movements that the simulator is creating, then it can break the illusion, and therefore sometimes break immersion.

One symptom of both feeling and seeing the movement in driving games or simulations is that people react to the acceleration forces as actual movement of the vehicle. This usually results in wild overcompensation with the steering wheel and the player entering into a tank slapper!

Due to demand, we’ve been working on our own motion compensation solution that integrates with SteamVR and Actuate. There are two big advantages to this approach…

We have now reached the beta stage of the development. We have initially focused on the Atomic A3, mainly as most of our user base is using this simulator. Right now we have a few customers trialing the software so far, and we’re really looking forward to the initial feedback. Other simulator support will follow as soon as possible. 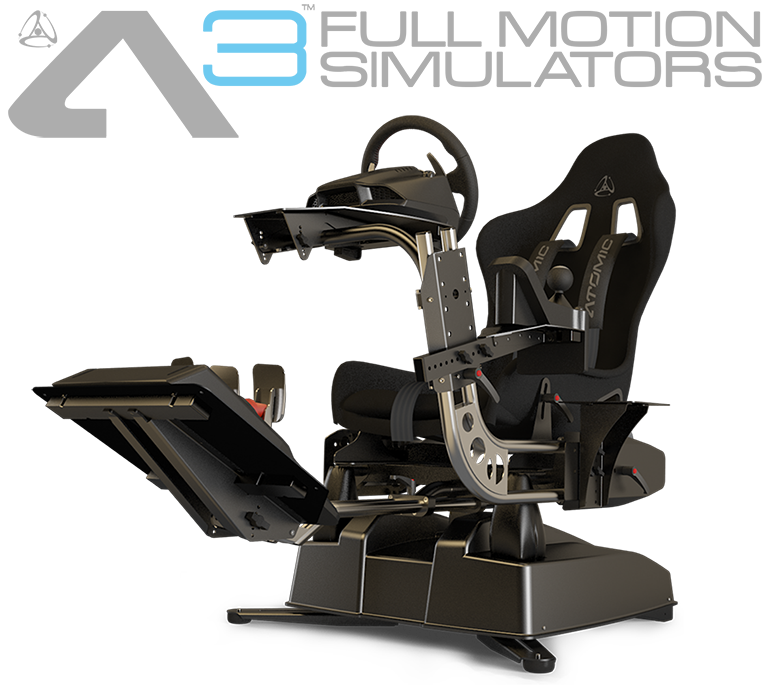 The following image shows screenshots in SteamVR home taken with the Atomic A3 at full roll to the right. The VR headset was attached to the headrest of the simulator so is in the same relative position in both images. 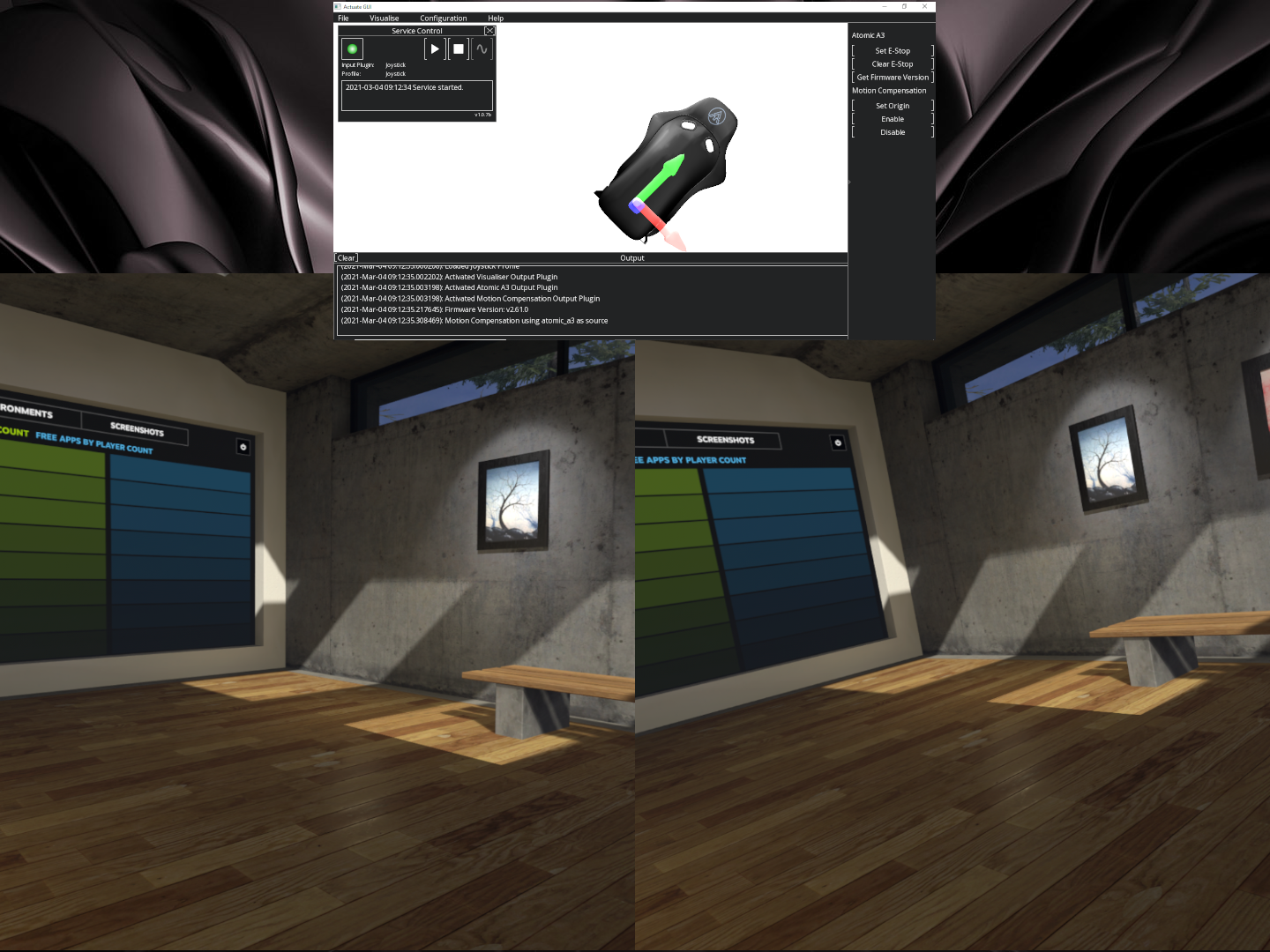 I have to say, having played some racing titles with and without the motion compensation, I’ve been amazed at how subtle it looks to the outsider watching on, but when you are in the experience the difference feels very pronounced. I would describe the main difference as a feeling of increased stability of the vehicle. It feels so much less frantic to drive.

We’d love to hear from you if you use VR and motion together and like the idea of giving motion compensation a whirl. You can get hold of us here 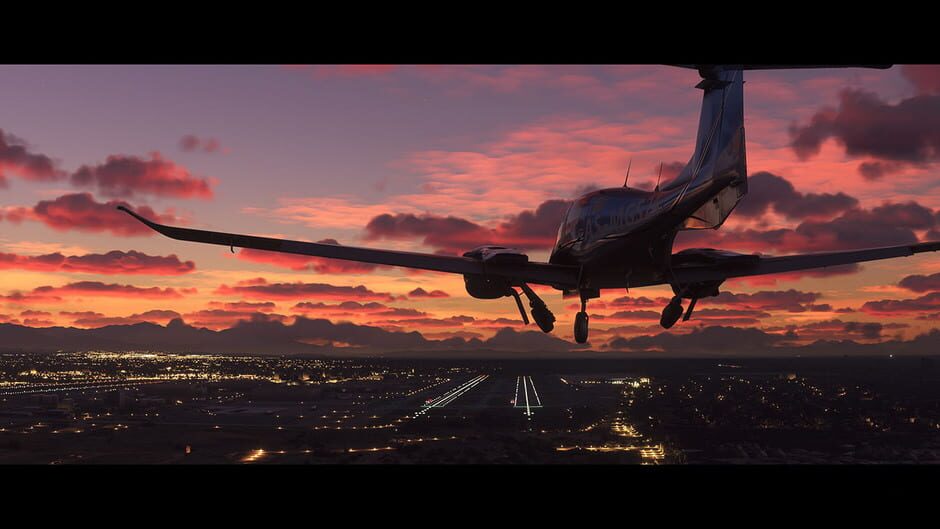 We’ve now created a new input plugin to add support for Microsoft Flight Simulator 2020. As this is a very important title and we are only part way through the development cycle for the next release, we have decided to make this available as an installable plugin rather than simple adding it the the next release.

In fact, this is the very first plugin that we have made available using the installable plugin feature, so this post will also act as a little “how to”. The next version of Actuate will have this information in the user manual.

The first thing that you will need to do is to download the plugin file. Head on over to the Downloads section, and locate the download called “FS2020 Input Plugin v1.05”. Download it and make a note of where the file is saved. As the download name suggests, this plugin is for use with Actuate Motion v1.05. You’ll need to unzip the file so that you end up with inputplugin_fs2020.plugin saved.

Next,open up the Actuate GUI and navigate to Configuration->Plugins->Install Plugin. On the window that appears use the browse button (magnifying glass) to browse to, and select your plugin file.

Once you have selected your plugin file, click on the Install button and the system will attempt to install the plugin. Please be aware that in order to install plugins, the system needs raised privileges so may prompt for these permissions.

Once the system has installed the plugin, you will get a message on the bottom of the screen saying “Plugin Manager Complete”. The plugin should now be installed.

If you are using the Steam edition, then you can find this folder from within steam by using the “Browse Local Files” facility within Steam. This folder is normally located under:

You should copy the actuate_fs2020_telemetry.exe file from your actuate installation folder (probably C:\Progrram Files\Actuate) to the FS2020 binary folder.

If the binary path for your copy of FS2020 is not the default steam location (shown above) then you must also now configure the input plugin with this path within Actuate.

To do this, open the Actuate GUI and follow the menu through Configuration->Plugins->Input Plugin Setttings.

On the Input Plugin Configuration window, find and select FS2020 in the Input Plugins list. The right hand side of the window should now populate. You must update the “FS2020 Folder” setting to the location of your FS2020 binary folder, and click Save.

Please note that when the FS2020 input plugin is activated, it will check to see if the support application (actuate_fs2020_telemetry.exe) is running, and if not it will attempt to start the application. This application must be running for motion output from FS2020.

Version 1.0.5 of Actuate Motion is now available for download. This version adds a few more titles to the mix, mostly older titles that have been requested:

The main addition though is a first version of Actuate Motion Hub!

Actuate Motion Hub is an add-on feature to Actuate Motion that is aimed at installations that have many simulators networked together, such as an arcade or training centre.

Using web technologies, it allows control of all simulators on the network from a single interface. This interface is anything that can run a web browser and connect to the network. A phone, a tablet, a computer….

It’s still early days with Hub, so at this stage, we’re calling out for help from any users that think that they might benefit from the features that Hub has to offer.

We need people that are happy to give it a try, and provide any thoughts or feedback that they may have so that we can spend our time working on features required by users rather than features we use ourselves!

Here are a couple of screen shots to give a little taster of the web interface. 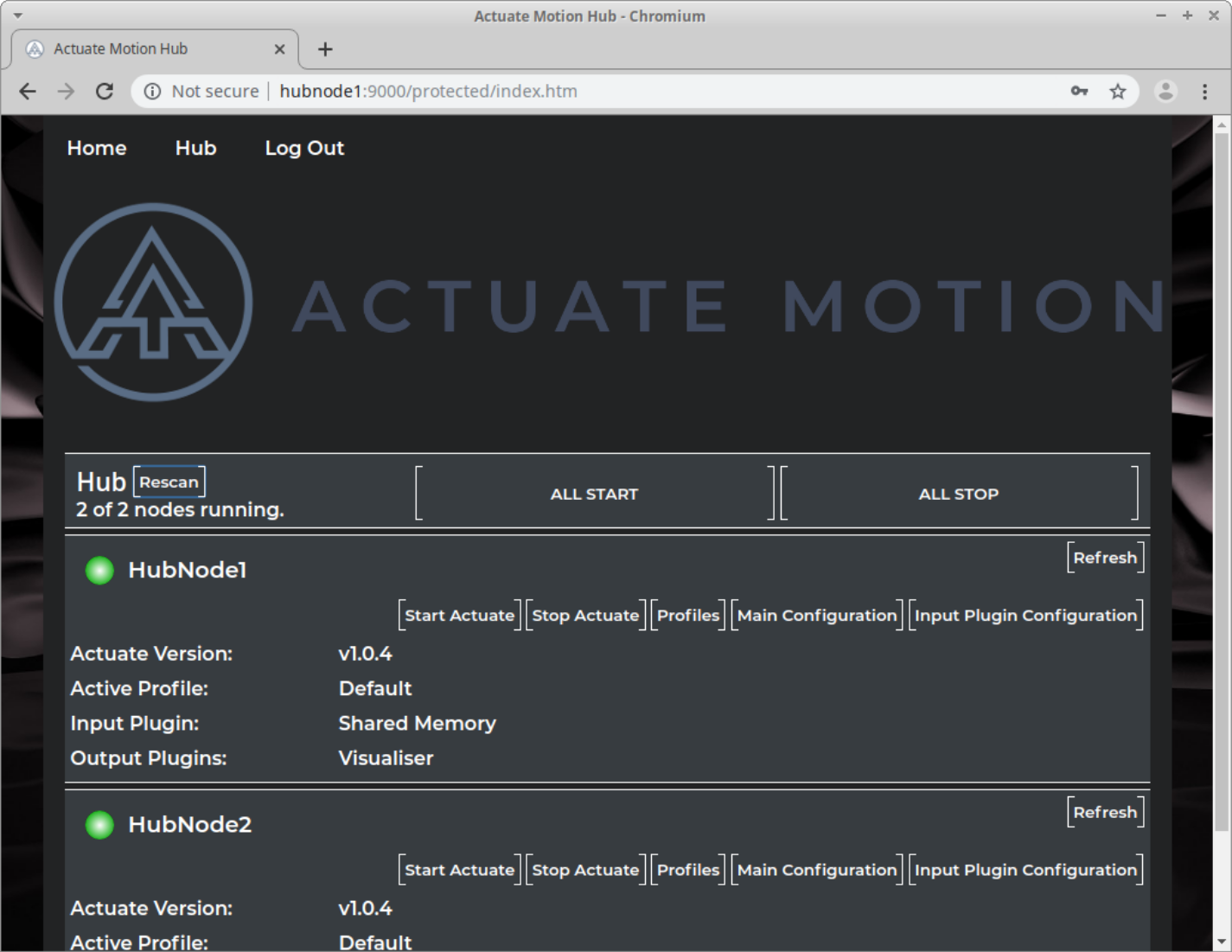 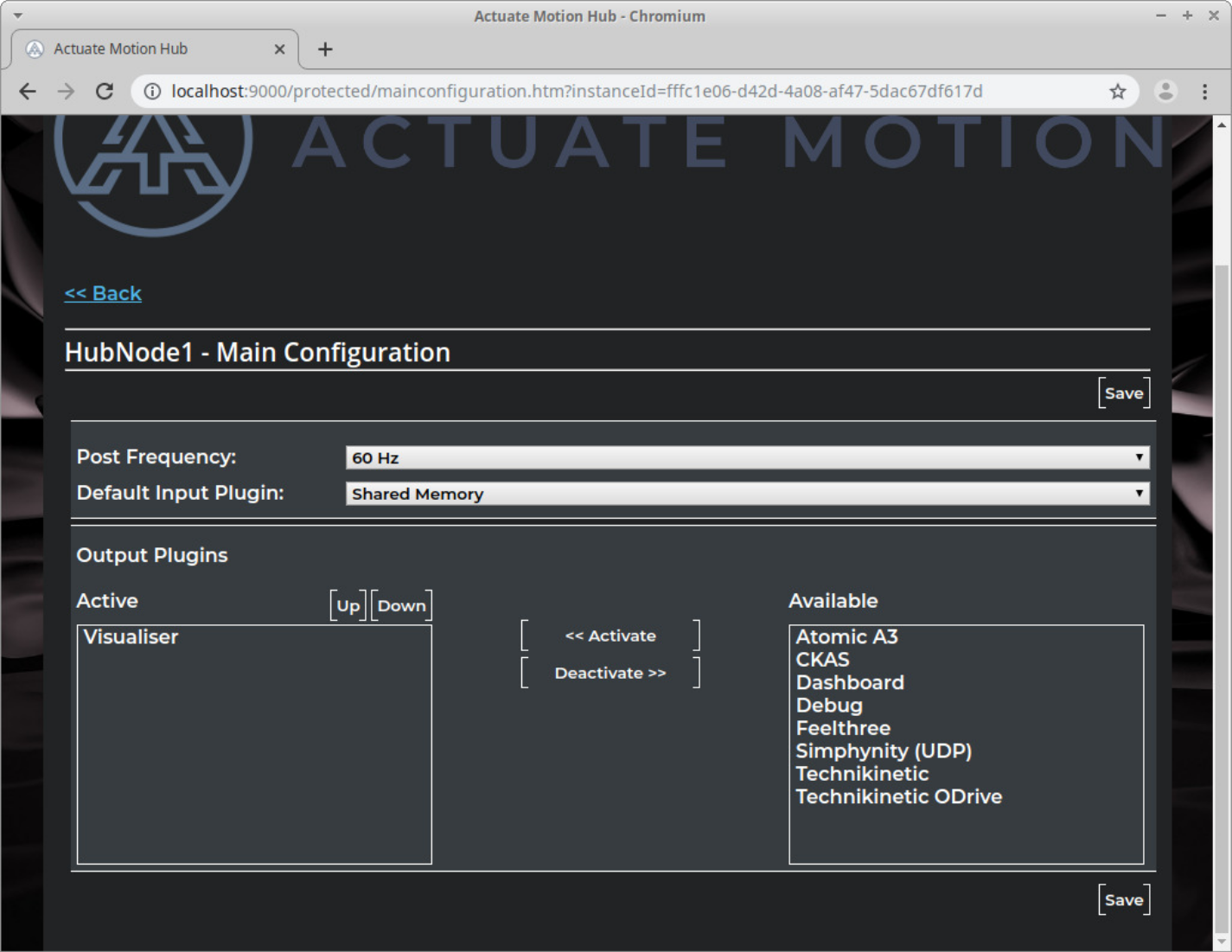 If you’re interesting in helping giving it a try, then please drop us a message to let us know! You can get hold of us here

Today we are pleased to announce that we have been working closely with a new simulator manufacturer called Delta Kinetic.

They have 2 models in their line up – 3, and 4 degrees of freedom models. They also provide just actuators if you fancy your hand a making at simulator yourself!

Working in partnership with Delta Kinetic and Novatech to offer a full hardware and software solution, we have provided full installations to some very demanding use cases. You can read more about one such use case here.

All Delta Kinetic models are driven by Actuate Motion, and so far it’s been a lot of fun being involved from the very start of development. Here is a short video of the first test flight of the Delta Kinetic 4 DoF model to show you what we mean!

Version 1.0.4 of Actuate Motion is now available for download. In this version we have added even more options to create the perfect motion profile to your liking. It is now possible to smooth just the acceleration data, or just the orientation data if you prefer. Of course, you can still smooth the overall output if that’s what you want!.

We’ve noticed that some people are not aware of the existence of the user manual as it is not obvious. With this in mind, we’ve added a link right there in the Actuate Motion GUI that access the user manual. So there’s no more excuses not to read it now!

There have been a few bug fixes both within the actuate process and within some of the plugins. The fixes of note are:

Of course, a release wouldn’t be complete without at least one new game supported. In this version we’ve added:

There have been a few minor bug fixes, and a few improvements such as adding some more options to the profile settings to give more control over your experience.

The main thing of note though is that we’ve added more game support!

We now have support for:

This version also paves the way to be able to install plugin files without having to reinstall Actuate Motion, but more on that in the near future!